Facing life struggles is hard but not always detrimental 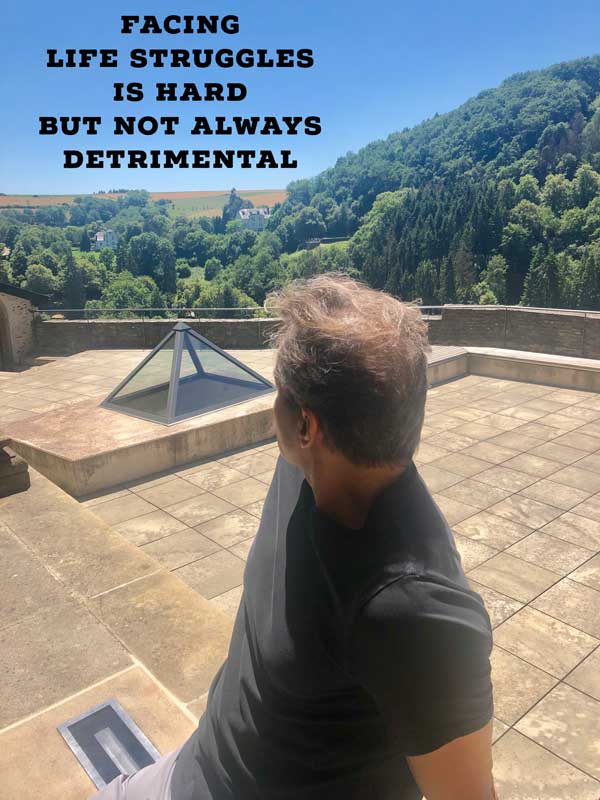 Facing life struggles is hard but not always detrimental. By Ari Iraniha

The year is 1992 and George H.W. Bush is the president. Andrew has just immigrated from his beloved hometown Tehran, to the great bustling city of Angels, Toronto. With his mind securely set on where he wanted to end up, career wise, Andrew begrudgingly decided to leave his friends and family behind and take his talent to the West. This is where he would spend the next four years of his life hustling, enterprising, and harvesting his knowledge to ultimately become the person he is today. He was 28 years of age when he first set foot on Canadian soil, bewildered by the new world he had just entered. Everything was incomparably different; he noticed while thousand-yard gazing at the city horizon through his taxi window, in-route to his apartment. The architecture of the high-rise buildings appeared to be as contemporary as the futuristic city depicted in Blade Runner; the air had a uniquely clean scent, devoid of congestive pollutants, reminiscent of the island of Maui; and people seemed to be peculiarly going out of their way to obey traffic laws. It was a lot to digest in such a short time, but it was at that moment he knew deep down that this place, bound by no opportunity limit, would grow on him.

His spark and excitement were at incomprehensible highs and the flutter in his chest took full effect, as the yellow cab pulled up to the curb adjacent to his apartment. Sparing no time while keeping his eye on the prize, he gave a token of appreciation to the cabby and bolted up the stairs leading up to the entrance of the high-rise, all the while carrying the weight of his lifetime supply of luggage. With his head rested against the oak wood door of room 118, and a smile so radiant you would need a visor to be protected from cataracts, he entered his pre-furnished apartment and sprawled out on the couch. He lied there contently, eyes glued to the ceiling, imagining every possible scenario of how his first day at surgical residency could play out. Tomorrow would be the first day he stepped through the Grande doors of Toronto General Hospital, wearing his white coat and tie surrounded by doctors of high and lower status alike, who would surveil him while he did his patient bed to bed rounds, offering advice and help. The most daunting figure in the hospital was by far the residency director, the main guy in charge. He would be the ultimate critic of Andrew’s work. His mind tirelessly kept playing movies with different endings. Not knowing what to expect, Andrew mentally prepared for a rough beginning as his English was fragmented and still had some developing to do. He was concerned that the language barrier would interfere with his work, leading to problems down the line but he brushed it aside and got ready for the big day.

Dusk became dawn as he rolled over to snooze his alarm. Considering the occasion, he saw it fit to add another shot of espresso to his drink to be extra alert and attentive. He arrived at the hospital five minutes earlier than his scheduled shift in the intensive care unit and was greeted by colleagues that would work alongside him for the three months to come.

“You’re late” one of the surgeons retorted.

They briskly handed him an uncomfortably thick stack of papers with all the patients he had to attend to and sent him on his way. Time stands still in the hospital because of the overwhelming number of patients one must deal with, so it did not even occur to him when he pulled out his phone to see that three hours had passed. The next patient in line was an elderly man with suspected pancreatitis complaining of intermittent abdominal pain onset two weeks ago. While he stood there for a moment sterilizing his hands, the door swung open and the residency director entered with a piercing stare that made the room feel colder. Trailing him was a large group of able-bodied doctors and nurses. Their intimidating presence brought about a draft and everything seemed to move slower than usual, like an old wild western showdown was about to take place. Nevertheless, Andrew approached the group to introduce himself to the director. They shook hands and with a contemptuous tone, the director asked: “are you the one from Iran”? Confused by the directors opening remark, Andrew timidly replied: “yes I am, its very nice to meet you”. The director responded: “I wish I could say the same.” Andrew felt his blood pressure spiking and arteries constricting when it came to his attention that they were all going to the same elderly patients’ room. The director pulled the curtains aside and the mob situated themselves around the patients’ bed. The commanding voice of the director echoed the room as he called on Andrew to come to the front and present the history of the patient’s illness. With his hands trembling and heart palpitating, Andrew stood in front of the crowd and began reading off the paper. He was interrupted in the middle of his sentence by the director who said: “Why are you even here if you can’t speak English, this is a waste of all our time.” He followed up by asking very difficult and convoluted questions regarding the patient’s disease, stumping Andrew to the point of speechlessness. Andrews’s gallant attitude prevailed his fear, allowing him to momentarily zone everything out and formulate an appropriate answer to the directors’ question. Given English was his second language, Andrew stammered through his explanation and was cut short once again by the directors booming voice exclaiming: “you seriously think you have any chance of being a surgeon, when you can’t speak a lick if you’re life depended on it.” He was caught off guard and suddenly felt a gaping hole in his chest cavity, where his heart was. Scanning the room made him feel worse to see the others disparagingly looking at him, because of the director’s impression. His dignity had been stolen from him before his very eyes and all he felt like doing was sobbing where no one could see tears streaming down the contours of his face.

This vicious cycle of being tormented for his deficit in English carried on for the remainder of his time in the ICU. The other doctors and nurses went out of their way to avoid him and consulted with each other, excluding him from their endeavors. Instead of letting sadness consume him, his disgruntlement pushed him to take active measures. He began self-educating every night and watched TV sitcoms like Saved by the Bell to rectify his impediment. He turned a negative situation onto its head and envisioned a positive ending, where he would gain back the respect of his colleagues. After toiling away for months, the hospital transferred him to a new unit where he would complete the rest of his training. He made new friends that accepted him as a foreigner, revering him for his diligence and the fact that he had everyone in the room clutching their gut cracking up to his jokes. His journey from then on sailed much smoother. Fast forward 10 years and Andrew is regarded as a highly esteemed professional, saving countless number of lives, and making a positive impact on his community.